What is the PEDION24 program?

The program PEDION24 aims to continuously record (on a 24-hour basis) the levels of electromagnetic radiation in various regions of Greece and post the results online. More specifically, PEDION24 consists of stations for measuring the levels of electromagnetic radiation installed in various sites. The monitoring stations are equipped with certified electric field measuring probes and every 6 minutes they record and store the electric field strength values in their memory. Every 24 hours, the monitoring stations communicate through the GSM/GPRS network with the management center and send the data to the central server, where there are processed and published on the internet.
What do the monitoring stations of PEDION24 record?pedion242020-06-29T08:11:16+00:00

What do the monitoring stations of PEDION24 record?

The monitoring stations of PEDION24 record on a 24-hour basis the electromagnetic field strength at frequencies in the range of 100 kHz to 7 GHz. In Greece, most wireless telecommunication services operate in this frequency range. More specifically, the antennas of radio, television, cellular networks (2G, 3G, 4G), wireless networks (Wi-Fi), and other services, broadcast in those frequency bands. Thus, PEDION 24 program provides comprehensive information on the levels of electromagnetic radiation resulting from the sources mentioned above.

Who are the creators of the implementation and operation of PEDION24?

What do we mean by electromagnetic radiation?

These are oscillations of electric and magnetic fields that propagate as waves at the speed of light. Our electromagnetic radiation is known in the natural and artificial environment in various forms. Infrared radiation, visible light, ultraviolet radiation, X-rays are part of the electromagnetic spectrum as well as radio and television frequencies, microwaves and the electric and magnetic fields of the electric railway and power lines. As for the radiation of cellular systems, the electromagnetic radiation comes from the frequency range between 700 MHz and 3600 MHz. From a physical point of view, these different radiations are different in frequency and energy . 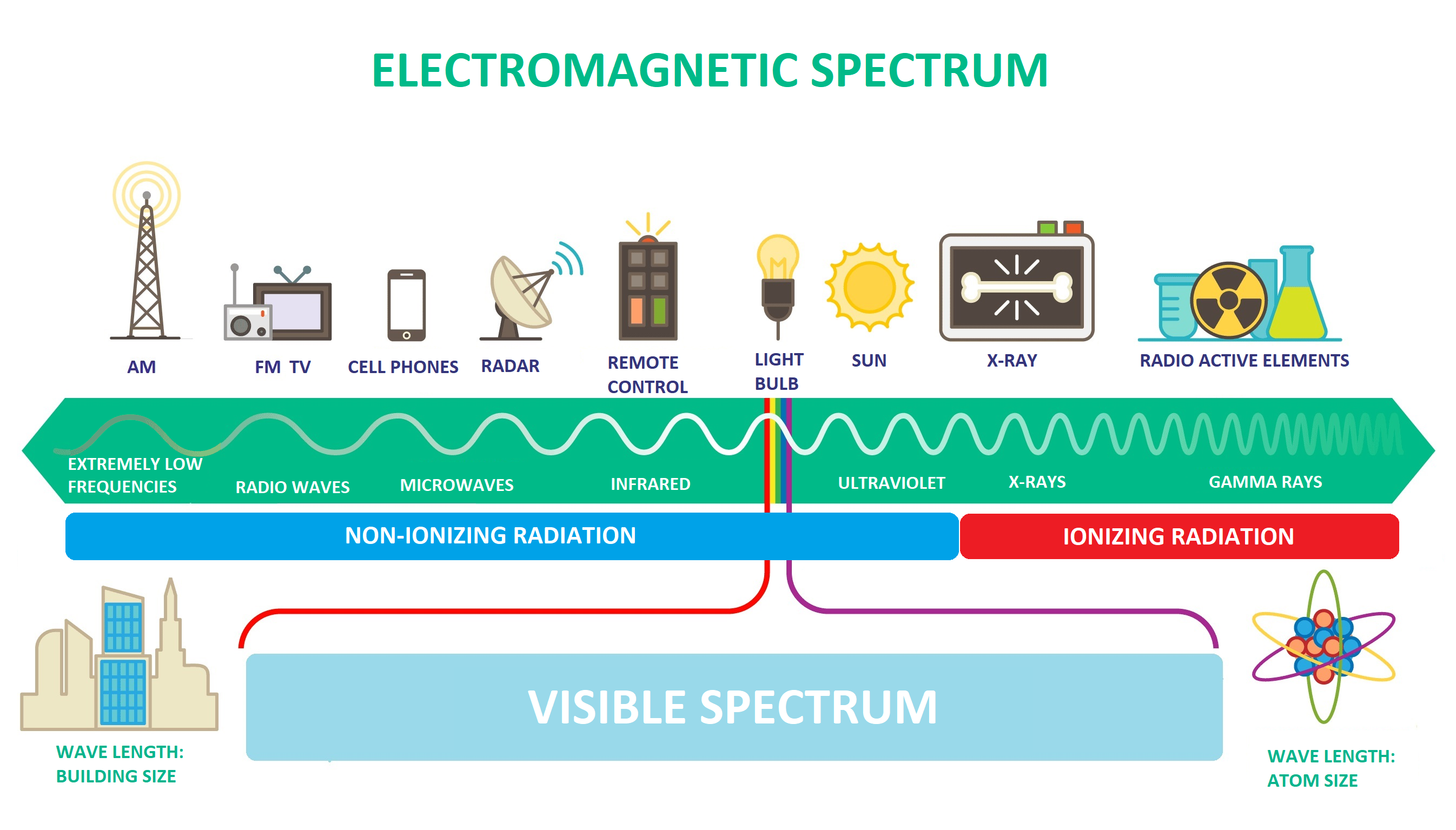 In relation to the carried energy, electromagnetic waves can be described by the following quantities:

In the radio frequency range, the basic quantity that characterizes electromagnetic fields is Electric Field Strength which is recorded under the program PEDION24.

What kind of radiation do antennas emit from mobile phones and base stations?

There are three physical quantities that describe the intensity of electromagnetic radiation:

Mobile phones and base stations emit electromagnetic radiation, i.e. oscillations of electric and magnetic fields, that propagate in space in the form of a wave carrying energy. The different types of electromagnetic radiation are distinguished from each other depending on the frequency or wavelength of the propagating wave. Frequency and wavelength are two inversely proportional quantities, that is, the lower the frequency, the greater the wavelength.

Are there exposure limits for EMF emissions in the radio frequency range?

For electromagnetic radiation emissions in accordance with the Recommendation of the Council of the European Union "On limiting public exposure to electromagnetic fields 0 Hz - 300 GHz" (L 199, 1999/519/EC) laying down basic restrictions and reference levels for the electromagnetic radiation induced by these antennas. The Greek state has set stricter exposure limits compared to the limits set by the European Union. According to the Greek Legislation, the way of the measurements is ensured, control mechanisms are defined for EMF radiation levels, as well as the installation of antennas which has not been approved by authorized bodies is prohibited.

How the radiation decreases as we move away from the base station?

The main feature of Mobile Communication Systems is their cellular structure. The design of radio networks is based on this structure. Each cell serves through a base station (BS) a geographical area with a radius of a few meters to a few tens of kilometers. The BSs are connected to the switching centers, which connect the radio network to the external voice and data networks. In the BS we assign a set of frequencies (channels) to each cell and seek to reuse the same channels in space. Dense reuse implies high spectral efficiency but also an increase in unwanted co-channel interference. 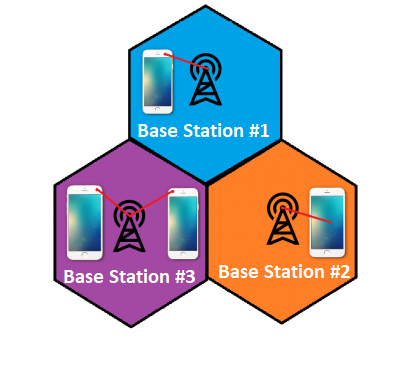 It is a common misconception that to achieve twice the distance in a radio coverage connection, we can simply double the power. The reality is that to double the distance, 4 times the transmission power is required. This rule comes from a simple geometric formula that states that the propagation of radio waves extends in the shape of a sphere and the surface area of a sphere (and therefore the power density) changes proportionally to the square of the radius (in this case the radius is the distance).

In other words, if we use a 1 Watt transmitter we can cover a distance of 1 km, to reach 2 km we will need a 4 Watt transmitter. Of course the radio coverage distance depends not only on the power of a transmitter, but also on the gain and height of the antenna, the quality of the receiver and the obstacles on the ground.

How exposure limits are set?

The established reference levels have been set taking into account the uncertainties of several factors, such as environmental conditions and the different physical situations of the general public. According to the Greek standards, the reference levels are decreased by 30% from those of the EU (i.e. 70% of the reference levels). Especially for vulnerable groups, the resulting values are set to 60% of the initial EU values, ensuring total security and compliance with current legislation throughout Greek territory.

What are the benefits of the 5G network ?

5G technology is the only technology available with which physicians who are located in urban areas can reliably examine, with high definition and using devices and robotic equipment to surgeries and palpate the tissues of a patient located on a remote island. Also, 5G technology is the only one that can support remote diagnostics utilizing experienced artificial intelligence systems.

The Digitization of the Economy is evolving rapidly, offering recognized benefits. The development of 5G networks is the catalyst for deepening the Digital Economy. The possibility of access to new markets and the increment of the population to which they are addressed, the reduction of production costs and the increase of productivity, as well as the creation of conditions for the rapid adoption of innovation at all stages of their production processes, are some of the benefits that can be occurred.

What led us to the development of the 5G network?

Due to the globalization of the economy, the industries and countries which are moving faster towards the Digital Economy have a decisive advantage over the backward ones for future and sustainable development. Therefore, the development of 5G technology can be a unique factor and pole for innovation, development and production and, consequently, Greece can only benefit from its timely adoption. Slow and passive adoption of 5G can only negatively affect the country, as others (countries and industries) will have gained valuable experience in their rapid and efficient transition to the Digital Economy, both through the timely development of new services and cases, as well as through the production and export of innovation.

Is radiation from cellular phones and base stations radioactive?